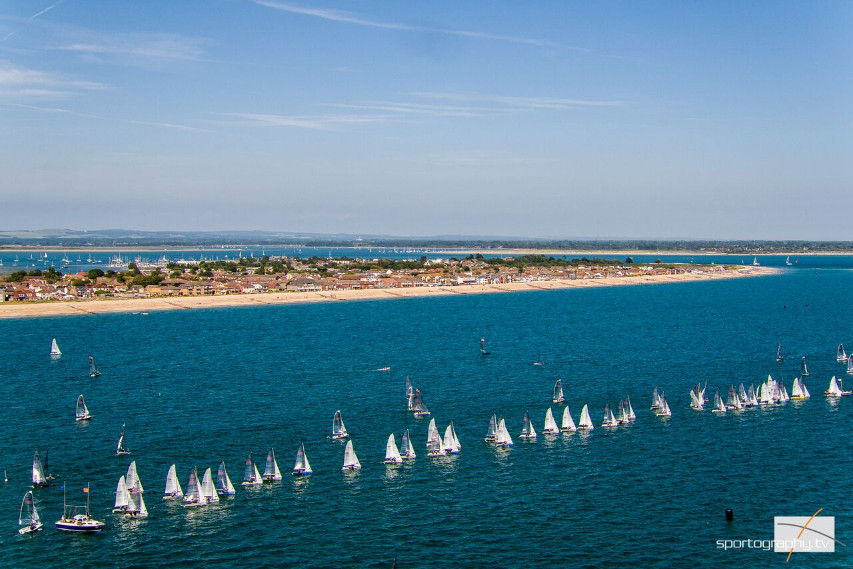 Scroll down for daily reports and results.

Hayling Island Sailing Club are the hosts of the biggest ever RS200 Nationals. 182 boats left the beach for day one of the 2022 RS200 National Championships sponsored by Rooster and Noble Marine.

The wind was light with a hint of brightness on the horizon, however, a huge black cloud hung over the eastern corner of the Isle of Wight. The RO Mark Wood took advantage of the light fickle wind to run a few starts although he was always doubtful that the 5 knot shifting wind would hold.

Eventually the wind disappeared, and the fleet had to wait a further hour until the cloud dissolved, and the SSW gradient returned with a fairly steady 8-10 knots.

Finally, the spectacle of 180 boats starting on one gate start was realised. The course is an incredibly long first beat with spacer, down to a leeward gate, then a shorter windward leg then back down to the finish. Tommy & Charlie Darling flew out of the blocks first & headed left, but it was the pathfinder Rory Odell & Henry Jameson who looked good at the top when a right shift came through.

The heroes of race 1 were Steve Cockerill & Emma Clarke who teamed up this morning after Covid stopped Hamish from taking part. They took the lead on the second leg & pulled away from the fleet for a convincing win. Rory & Henry held onto second with JJ & Jess Hammett climbing to third.

Race 2 was equally full of snakes & ladders but this time it was Arran Holman & Haydn Sewell who showed the way closely followed by David Jessop & Sophie Mear, with Richard Thomas & Tom Goodey in third.

So, day one finished with the fleet sailing home as the sun started to sink but in beautiful sunshine.

Arthur Henderson & Jamie Webb struck lucky as pathfinder in the first race of the day; the wind flicked right enough to stop those from the left becoming a threat. However, it was the Class Chairman Will Taylor & brother Matt who rounded the top mark first, Arthur & Jamie close behind in 2nd. By the leeward gate it was overnight leaders David & Sophie shooting up 'a ladder' from 15th to 1st with a right shift just as the rain started. The shifty wind under the rain clouds resulted in more place changes up the final beat & run, but it was Arthur & Jamie taking line honours from Steve Cockerill & Emma Clarke, with Mozzy & James in 3rd.

Within 20 minutes of the last boat finishing the RO was back in the gate boat ready to start race 4 of the championship. A right flick of a shift resulted in the AP going up but 10 minutes later we were back on track. Tommy & Charlie were the first to make headway out of the middle of the line but it was Richard Thomas & Tom Goodey rounding the windward mark in front, Elliot & Martin in 2nd, Tommy & Charlie in 3rd. By the gate Arran & Haydn had climbed from 4th to first, a lead they held to the finish. Behind them the battle continued but it was Elliot & Martin holding on to 2nd, whilst Tommy & Charlie climbed back from 5th to 3rd on the final downwind leg.

In the races so far the average time between the first & last finisher is 14 minutes, that's one boat every 4.5 seconds! The overall points are incredibly close too, so with 3 more race days to go, the game of 'snakes & ladders' continues.

The forecast for day 3 of the RS200 Noble Marine Rooster Nationals was a building breeze, sunny spells & possible rain showers. We got the breeze for the 3rd race of the day, we saw a sliver of blue sky, but in reality the wind was affected by the black shower clouds.

Race 5 started in a shifty 8 knots building to 10 knots by the end. Arran Holman & Haydn Sewell took the shifts up the beat to lead at the first mark, with Elliot Hanson & Martin Wrigley, 3 boat lengths behind. A gybing duel & match racing tactics from Arran kept Elliott behind at the finish with Ian Martin & Chris Catt in 3rd.

The wind dropped for race 6 & shifted with the black clouds over the mainland & over the Isle of Wight. The Hammett's were pathfinder, but three quarters of the way up their run, the AP went up & the start was aborted, due to a big left shift. The race went ahead on the 2nd attempt & again the middle left paid. Another shifty race with some snakes & ladders both upwind & downwind. Elliot & Martin picked the left side of the course on the downwind & romped into the lead. Niki Birrell sailing with Ben Whaley came in 2nd with James Grummett & Larissa Connabeer in 3rd.

Race 7 & the wind had increased to 12 knots. Elliott & Martin stretched their legs with Arran & Haydn in hot pursuit. But Tokyo Olympian Elliott & 470 helm Martin, who have teamed up just for this event, were now in their stride & stretched their lead as the wind increased to 15 knots. Arran & Haydn stayed in 2nd with Ian & Chris taking another 3rd today.

During the 'Ask the Experts' session last night Elliot, Martin, Arran, Emma Clarke & Tommy Darling gave those in the audience some of their top tips. Some great advice which hopefully worked for some people today.

The sailors arrived at HISC on day 4 of the RS200 Noble Marine Rooster National Championships to cloud and a fickle breeze. After an indefinite postponement, the fleet started racing in 6-8 knots & sunny skies 2 hours later than scheduled.

Leading race 8 at the windward mark was Jamie Harris & Ellen Main - a lead they kept to the finish. By the bottom of the run Tommy & Charlie Darling had caught up from 10th to 2nd with Steve Cockerill & Emma Clarke in 3rd. The race committee moved the windward mark with the right shift but places remained the same at the top. The final run was a three-way battle for 2nd, with Elliot & Martin coming out in front of Tommy & Charlie at the final mark.

Race 9 looked tricky with sea mist starting to roll in from West Pole & the wind still light & shifty. The windward mark saw many new faces at the front end of the fleet. Alex Smallwood & Callum Farnden rounded first as the wind dropped even further. By the leeward gate Elliot & Martin had taken the lead, whilst Alex & Callum dropped to 3rd behind Tom & James. The mist held off long enough for Elliot & Martin to secure the race win & the overall championship with a race to spare! Alex & Callum caught back up to 2nd with Morgan & Charlotte in 3rd. Tom & James were 4th, moving them to 2nd overall and a healthy 13 points ahead of 3rd placed Arran & Haydn.

Day 5 is forecast to be a very light northerly but fingers crossed the final race will be sailed to wrap up the championship.

The final day of the RS200 Noble Marine Rooster National Championships started with heavy rain & no wind. The threat of thunderstorms kept the fleet on shore for an hour after the intended launch time. The poor forecast meant that the race team had put us ahead of schedule earlier in the week, meaning there was just race 10 to complete. The rain eased and the fleet launched with no real idea what the conditions might be in Hayling Bay.

A light but consistent westerly greeted the fleet; an improvement on every weather model prediction. The left looked favourable with more tide and better breeze. The teams in the podium hunt David Jessop & Sophie Mear, plus Tommy & Charlie Darling, gambled on the early start. David felt confident to keep pushing left but Tommy took the first header, tacked & crossed the fleet. The wind continued to clock left & Tommy never found a route back. David & Sophie hit the port lay and cruised in with a healthy lead which they held until the finish. They were followed by Arthur Henderson & Jamie Webb, with Chris & Nicki Webber in 3rd. Arthur & Jamie stayed in 2nd whilst Lee & Alex Sydenham took 3rd after the Webbers lost a protest.

The brother & sister pairing of Tommy & Charlie were 4th for the 2nd year in a row; whilst the winners of race 10, David & Sophie came in 5th. Father & son, Lee & Alex Sydenham also left with a clutch of prizes; 6th overall first Master & first family.

Also a new trophy was awarded in memory of superstar coach Jonathan Lewis. The John Lewis Star of the Year Shield was awarded to Juliet Kennedy & Oliver Dennis as most improved results for the week.

The prize-giving was held on the balcony as the sun set behind the club. It marked the end of a fantastic event & the biggest RS200 Nationals ever. Mark Wood and his race team did an incredible job to get all 10 races in across a varied range of conditions.

Thank you to Hayling Island Sailing Club, all the volunteers, the RS200 committee, Event Secretary Debbie Jarvis, our generous sponsors Noble Marine and Rooster & the 364 competitors who made this event so special.