24 RS200’s reveled in the most amazing conditions that only come along once every few years! Wall to wall sunshine, not a cloud, 12-24 knots of wind and an ambitious programme of 5 races completed with great style, thanks to an excellent race team.

Edd Whitehead/Anna Horackova were clearly confused thinking that they were in an RS500 such was the distance they were in the lead in 3 of their 5 race victories! John Teague/Naomi Pound did manage to lead for the majority of one race in a very close tussle but Edd/Anna got the better of them. The Cornish wizards Henry Hallam/Ashley Hill were the only other boat to consistently live with the aces to record 2nd overall.

David Sweet/Derian Scott from CVLSC won silver division by the narrowest of margins from John Harvey/Sarah Maddison  with a great 8th overall in an obvious determined bid to get promoted. Sarah/David Green Llandegfedd were winners of Bronze division just ahead of Milly/ Taryn Tregaskis from Restronguet.

It is off to the always popular Parkstone for round 5 on July 16th – bring it on. 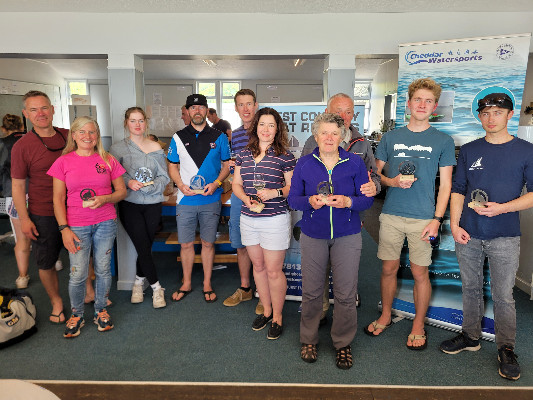